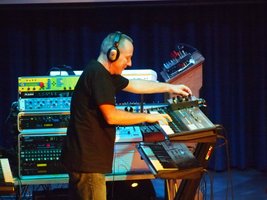 It all started in the late 70’s, I came into contact with music from Mike Oldfield, Vangelis, TD, JMJ, Tomita, Kraftwerk, etc. Not unknown to the fans. Of course I was inspired by this music but especially when I looked at the back of an LP and saw Tomita sitting in front of his modular system and read about Binson echorecs, Roland space dimension-D, string synthesizers, Mellotrons and Moogs. It was all abacadebra to me but it sounded unreachable and magical. All those knobs, potentiometers, blinking sequencers and still such beautiful music. For me this was the start of a goal, I also want to be able playing and understanding this music.

Around my 20th birthday (I was born in 1959) I bought a second hand Solina organ with a classroom keyboard / organ course (I had not had any music lessons) at a music store in Haarlem. Option was that if I no longer liked it, I could return the organ and only paid the lessons. During this period I saw a second hand Solina String Synthesizer, of course way too expensive but I bought it, then the passion really started. The organ was sold and the lessons could not really fascinate me, I did not like to play music from a note-sheet and wanted to experiment more and just discover the music myself (although of course I got a little bit of basis through the music lessons). Well, and then I saw a Shansui Hifi reverb unit, I had to have it, because I had something with the spaciousness of reverb.  Next purchase was an Ibanez UE400 multi effect with phaser / flanger etc. and the Yamaha E1005 analog echo. Because I already worked full-time when I was 19 (before that during my school) and already earned money, I could afford this, because it was all very expensive compared to now! Did I regret it, absolutely not, because a new world opened up for me. You can see what I purchased afterwards on my website
skoulaman.nl, there you can also see that I still have most of the purchased devices from the past. Except for the Solina String Synthesizer, which I unfortunately sold too cheaply … but yes, it was not predicted that the analog synthesizers would make a comeback again.  My current studio is a mix of analog / digital / VA instruments. I don’t use software synths.

I started recording my music in the late 90’s using a cassette deck.  Shortly after 2000 started with digital recording, this also brought the possibility to publish my music.
Especially the possibilities of the Internet have ensured that. Youtube (see my YT channel) gave me a boost. In the meantime I released the necessary house made CDs and also under the management of the Groove label.  You can also download my music from skoulaman.bandcamp.com.

I also perform now and then. I love performing, the whole process, making songs, practicing, the setup, the performance itself, all the preparations. During the performance I
play everything live, only use a sequencer / arpeggiator and hardware (actually the way I make my music in the studio also, all recordings are single stereo tracks!!). I am often accompanied by a guitarist, usually my son. I think the guitar really adds something to my music. And then of course also I like the contacts with the listeners and other musicians. Visiting festivals especially for this music scene is also part of that!

And how does my music sound. Let’s say in main lines, melodic, dreamy, a bit of Berlin school (very often an arpeggiator used as a sequencer with simple patterns), a little ambient and a lot of space (reverberation, echoes). Effects are very important to me.