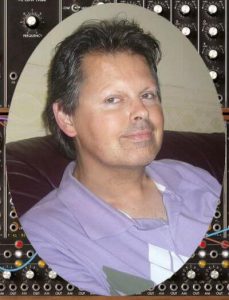 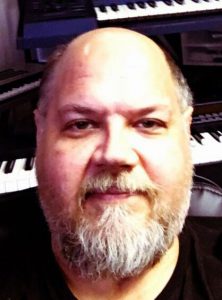 Diskographie: Breaking the Laws of Physics (2015), Spectrum of Possibilities (2018)

Parallaxe is a project between two synthesist who are separated by more than 6550 KM (4070 Miles). Arend Westra (a.k.a. Eagle) is a musicians/producer of Walterswald, Holland, and Brian Brylow (a.k.a. Arpegiator) is a designer of sounds, a musician and producer from Milwaukee, USA. Both artists met virtually through the social networks such as Facebook, Fandalism, Reverbnation and Soundcloud. The 3 last ones being musicians‘ sites. In the course of their exchanges they noticed that their musical visions fit together, in spite of the differences in their influences and in their cultures. From where the name of Parallaxe. A nice story!

Eagle (a.k.a. Arend Westra) is a musician/producer from Walterswald, Netherlands. In addition to playing bass in a number of bands, for a number of years now he’s been a tireless explorer of making music with synthesizers, computers and studio gear. As a child, synthesizers and electronic music were something new and experimental. Hearing all of these new sounds made him fall in love with electronic music. An important element in the sound of Eagle’s music is adding emotion to his compositions by finding gripping melodies. Eagle constant experiments utilize primarily software synths.

Eagle has been influenced by various classic EM artists such as Vangelis, Jean Michel Jarre, Tangerine Dream etc. but also listens to many new EM artists as well. His sphere of interest/influences are very wide from classic electronic music, ambient to the more modern styles such as EDM. Berlin School music will always be his first love.

Arpegiator (a.k.a. Brian Brylow) is an electronic music artist, sound designer and producer from Milwaukee WI. He has composed over 150 songs as a solo artist and has collaborated on a number of duo and group projects in the Ambient, Berlin School, Cinematic and Electronica genres, including being one half of Gorgon Nebula.

He is an life-long ambitious collector of vintage keyboards, guitars, drum machines, and also current electronic synthesis found in the technology of iPad instruments and soft synths and sampled vintage instruments.

Influenced by an ecletic array of music from Tangerine Dream, Klaus Schulze and Brian Eno to Hans Zimmer, Art of Noise and Stockhausen, there are often many different elements of electronic and acoustic elements combined in the creation of the Arpegiator sound.