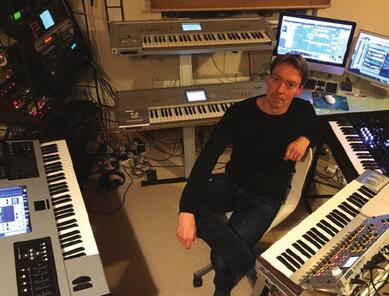 By the age of 8, I had been completely immersed in electronic music. Tangerine Dream’s  Phaedra had been played constantly throughout our house and being totally mesmerized by these obscure sounds, I saved all my pocket money for the biggest purchase so far in my life;
the newly released Ricochet in glorious black vinyl (which I still have). My first experience of seeing live electronic music was in 1980; a concert in London, which happened to be the Tangram tour. For me, this was just beyond amazing and simply magnified my passion for EM.

During the mid 1980’s, as I studied at art school, I saved hard to purchase my first analogue synths. But big sounds were expensive back then, so my hardware was limited. As technology moved on, sound creation became more accessible and as I pursued a creative career (as an Art Director in advertising & design), this gave me the resources to own better synth gear.

In the early 1990’s, I began add to my set up, experimenting with Cubase and sampling synths. Having sent some of my music to John Dyson a few years later (& receiving some very positive feedback), in 2002 I embarked on my first release. In 2004, I released my second album. Twelve album releases were to follow, the majority being on the SynGate label.

These days, my musical works are produced using a whole variety of software and hardware. I’m also beginning to take some steps back in time, working with a variety of modular set ups, alongside a mixture of digital synths, analogue synths and some soft synths. Combining these different sound resources is often a never ending voyage of discovery.

My chosen track, that I believe reflects where much of my music is now, is titled ‘Phases Of Equilibrium’, which from my last album, ‘Equilibrium’ (2022 on SynGate label). The creative thinking behind this music is the sometimes fine line of perception between reality and unconsciousness. For example, are you
always aware if you are actually within a dreamlike state? Sometimes this fine line is almost impossible to navigate clearly. The crossover between conscious wakefulness and a dreamlike state (or ‘hypnagogia’), being so finely balanced. Could this be a perfect state of Equilibrium…?