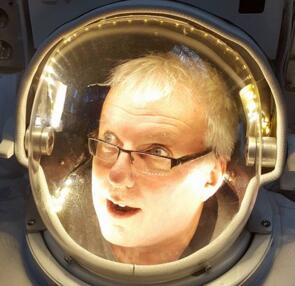 Computerchemist is the ongoing solo project of Dave Pearson, a British-Hungarian musician who lives in Székesfehérvár, Hungary.

Pearson’s love of electronic music started as a teenager when he first heard Tangerine Dream’s Cloudburst Flight. During the early 1980s he played synthesiser in a number of rock bands, including Lichfield UK-based Monteagle with founder Mark Thwaite, as well as simultaneously composing his own solo music.

In 2003 he had sold all of his synthesisers and had moved over almost completely to a virtual instrument environment using Cubase SX3, only using the guitar as a “real” instrument. Since 2006 he has issued a number of albums on his own label “Terrainflight”.
His music has been likened to “Berliner Schule/Berlin School style jazz-rock”.

Computerchemist was featured through the month of August 2010 on WDIY’s Galactic Travels show with Bill Fox, as the “Special Focus”, where each album was consecutively played back-to-back each week.

A different approach was taken for his fifth album, Music for Earthquakes(2011), involving the conversion of seismograph readings into musical form. It was inspired by the 4.8 richter scale earthquake in Hungary in early 2011, and featured on the national Hungarian news channel Hir24 and Hungarian English Language news site pestiside.hu shortly afterwards.

In January 2020, That Which Prevails was released, followed shortly afterwards by three retrospective album compilations Origins I-III which were compiled from surviving tapes from Pearson’s output between 1980 and 2003.

Pearson’s first motion picture soundtrack for the feature film The Fort was released as an album in January 2021. It won an award at the Berlin Indie Film Festival in March 2022 for ‘Best Original Score’.

2021 also introduced a new collaboration partnership with RadioRay, a singer/songwriter who has notably played in Alan Davey’s post-Hawkwind band ‘The Psychedelic Warlords’. This has led to two albums being released in 2021 and 2022 under the titles Masks and Underneath the Soul. In addition, a further solo album Parallel Thought Experiment was also released in 2021.