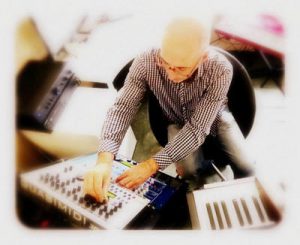 I’m a man of 53-year old, artist from Ghent, Belgium and my name is Didier Dewachtere. I got to like electronic music at my 15th birthday. It was the good-old time of new-wave music, which still remains a source of inspiration for me.

Later on I discovered the electronic music artists like Jean-Michel Jarre, Klaus Schulze, Tangerine Dream, Vangelis and Roedelius.. The ‘Berlin School’ had a real great impact on me. It may be obvious, the name BySenses was partly taken from one of Schulze’s songs, “Sense”. For me composing with the synthesizer gives me the freedom to create an ambiance related to what is living in my head. To create a special surrounding with special effects and sounds.

BySenses now has released his third full length album titled “People” on the Belgian label Wool-EDiscs. It is a beautiful and organic ambient epos in which analog, digital and human voice meet together into a swirling harmonic and colourful statement. The track “Before Birth” is also featured on this album. The song refers to the ‘before’ birth of my grandchild. It’s an organic song with some Berlin School influences. But I putted my own thoughts about music in it. My own accent on how I think and feel the electronic music.