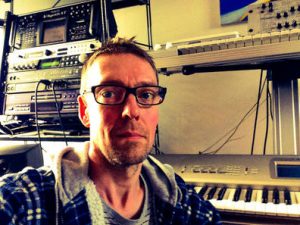 So, my passion for electronic music started at a very young age. My eldest brother saw Tangerine Dream play at a London concert during their Phaedra era – one of the lucky few to have seen them during their very early days.

He bought Phaedra and much to my parents dismay (&curiosity), it was played almost every day in our house…I was only eight, but totally transfixed by the mesmerising sounds. So much so, that I saved up all my hard earned pocket money and at the age of nine, travelled to our nearest record shop to buy Ricochet. I never looked back, especially after my first experience of seeing them play live in 1980 at a concert in London, during their Tangram tour.

My huge interest in electronic music just grew. There were other musical influences along the way and as my at art college studies progressed, I saved the little money I had, eventually purchasing my first analogue synth. But big sounds were expensive then, so my hardware was limited. As technology moved on, sound creation became more accessible and as I pursued a creative career (as an art director in advertising & design), this gave me the resources to own better gear.

In the early 90’s, I began to use Cubase and sampling synths. Having sent some of my music to John Dyson a few years later and receiving some very positive feedback, I eventually decided to attempt my first release. This was back in 2002, through SynthMusicDirect. In 2004, I released my second album. This time I managed to reach a wider audience, with the help of increased sales and radio play in the US (& a little in Japan). Five album releases were to follow , the last three being on the SynGate label.

My chosen track, which I believe reflects much of my music is titled ‘Blue Moon Epiphany’, from my last album, ‘Architects Of Orion’ (2017). The influences for this track (and much of the album), were the astronomical related discoveries of Isaac Newton. And my motivation to compose? The absolute passion for sound experimentation in electronic music and exploring the musically creative avenues this can take you down…