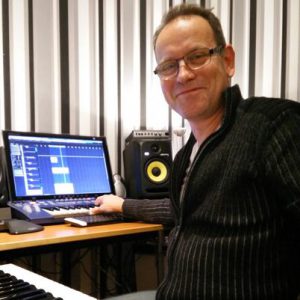 Synchronised is Francois ten Have.

At the age of 13 he discovered his first hobby-computer. This instantly got his full attention and he explored it’s possibilities and every available language at that time. It was then that he learned to program computers. Personal Computers were not yet available at the time and when they came they simply were too expensive. Later he did his Electronics education and that was a great way to combine the two of his hobbies. He started to work as an electronics developer, designed and programmed many hardware devices in the field of home and business security appliances. Today he works as a programmer for a software company in the Netherlands.

As a child, music always had his attention. So you could always find him lying in front of a radio with a tape recorder. Recording yet another cassette. “This love for music was something my parents gave to me. In our home there was music all the time. Collecting it was one of my biggest hobbies.”

The dream of making his own music has always been there, but he did not start doing this until 2013. And it was a big surprise to hear that the Schallwende included a track on their Schallplatte. He even got a nomination for best newcomer, ending third on the list. In the two years after that, new tracks were included on the next Schallplatte releases.