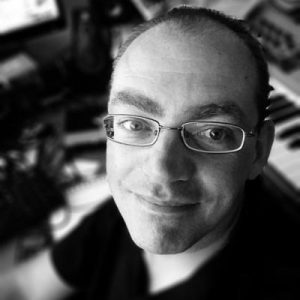 As long as I can remember I’ve been a fan of electronic music. I remember that a tough-looking classmate in high school, who always walked around with a Sony Walkman from which weird bleeps and bloops escaped, introduced me to the music of Jean-Michel Jarre, which for me was both a revelation and a feeling of finally coming home. Listening to electronic music at a very young age inspired me to compose electronic music myself.

I have no formal training in music. I am completely self-taught. I started messing around with an electric organ (my dad had a huge Eminent organ at home) during my time in high school (early 1990s). I started playing Jarre’s melodies, but learned to improvise as well. I started composing my own music in the late 1990s, when computers became powerful enough to use for a home studio, and when I was able to afford my first synthesizer (first a keyboard, my first synth was a Korg X5D). However, it is only in the last ten years or so that I have started to make some serious electronic music and invested both time and money in my music and home studio.

There are many musical influences to be found in my music, most importantly those of Jean-Michel Jarre, Vangelis, and Kraftwerk. But also Dutch synthpop groups like Future World Orchestra and Peru have been a major influence, going back to my childhood years. I’m a child of the 1980s, and my own music tries to capture and emulate the warm sound of that era.

For me, music is a mystery. I am an academic. I studied theology and received my PhD in Theology and Religious Studies in 2004. Although no traditional religious believer (meaning that I don’t believe in a personal God), for me music and religion are extremely closely intertwined. Music for me is closely related to transcendence, and when I am struck by music I often experience this as a religious experience. I perceive the creative process of making music as being a religious process, as a process of rapture. I often feel like a medium while creating electronic music.

I can’t explain the process by which I create music, I just have to undergo the process. When a track feels like it is finished, I am often astonished about the result, and I have a hard time remembering exactly how I created the track. It is as if the music uses me as a vessel or a medium. Everything is done while I am in a flow. I am an extremely rational person, often even bordering on the skeptical, but creating music is an utterly mysterious process which involves emotions but also – especially in electronic music – many other cognitive and rational processes. I feel I can only compose music by giving up control and by letting myself be guided by what is happening.

Thus it is with deep humility that I present you my track World II, since it feels as if it isn’t really my track. When creating this track (which is the second of two related tracks), I felt I was being transported away. I glimpsed through my mind’s eye an uninhabitable world in a distant part of the universe. Music for me is a synaesthetic experience, I ‘perceive’ the sound as colors, as if I am not just looking at a painting, but as if I became the painting or as if I became part of the world that is being depicted. For me the creation of World II is very mysterious and emotional. There is grandeur in the song and a certain uplifting and positive atmosphere, but there is also a kind of sadness, nostalgia concerning history, sadness about what once has been but is no longer.